Before we get into that, a little introduction in in order. My name is Bill, but my son calls me "Mutt". Don't ask why because no one knows, including himself. When he was just starting to talk, it's what he called me, and no matter how much I tried to get him to say "Daddy" he always said "Mutt". Eventually, I just gave up trying to get him to change, and accepted it. He's never meant it in a derogatory way, so I've grown to like it. My three daughters (all older than him) call me "Dad", so it's something that just the two of us share.

A quick synopsis of my life - Born in the Twin Cities, and grew up in a suburb of them. Growing up, we would go camping as a family, first with a tent, then later a pop-up camper. Graduated high school in 1983, and joined the Navy. Honorably discharged in 1990, and moved back home, where I started dating a woman again (we dated for about a year when I was in the Navy, but long distance didn't work out) who had two daughters. We started camping with a tent, and after we got married and had a third daughter (I adopted the other two), got a bigger tent. When she informed me that she was pregnant with our 4th child (who was my son mentioned above), realized that we couldn't fit all the kids and all the gear in the minivan, so we bought ourselves a pop-up. We had many years of fun camping in it.

But, as a lot of marriages do in this country, ours didn't last. We still get along, but just drifted apart. She worked nights and I worked days, so we only saw each other for a couple hours in passing when I got home and she was getting ready to leave. Her schedule didn't allow a lot of time for camping, and my car couldn't tow the pop-up, so we ended up selling it. I went back to tent camping, but I always wanted to get a camper again. And now, I finally did! 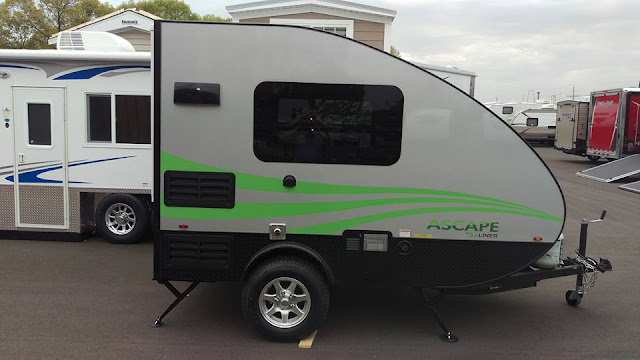 Meet "The Dawghouse". It's the new camper I just bought and picked up earlier this week. It's a 2018 Aliner Ascape. I came up with that name with the pop-up, but since that is gone, I'm recycling it for this camper. It's based on the name my son calls me ("Mutt"), and where else would a "Mutt" stay, but in a doghouse.

From the tongue to the rear, it's 13 feet long, and weighs 2250 (GVWR). I was lookign for a small pop-up or A-frame camper, but when I saw this, I had to have it. It has a dropped floor in the back so I can stand up straight at the sink and stove (I'm a 1/4 inch shy of 6 feet), has basically a queen size bed in it (table comes out and the benches become a bed), 24 inch LED TV and sound bar, 11 gallon fresh water tank, 10 gallon gray water tank (for dirty water from sink), 6 gallon water heater, furnace, air conditioning, 3-way fridge (runs on AC, DC, or propane gas), 2 burner stove, microwave, and built in cassette toilet (cabinets in rear left open and counter lifts up to access toilet). All inside a neat little package. 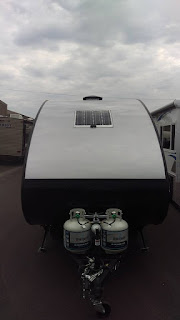 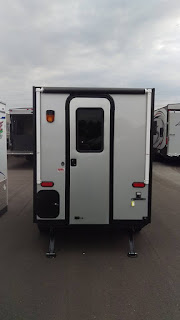 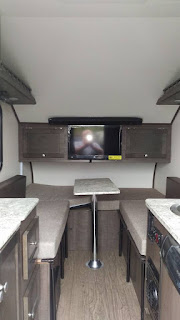 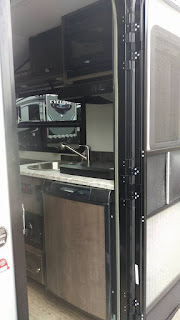 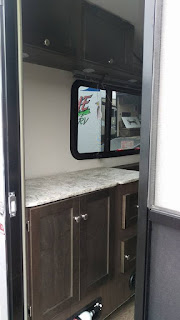 Now it's just a matter of finding the time to take it out on it's maiden voyage. I'm still working on getting all the equipment to pack up in it, and the next couple weekends are kind of busy for work. I do have a reservation made already for the end of July/beginning of August, but I'm really hoping I get a chance before then for 2 or 3 trips. 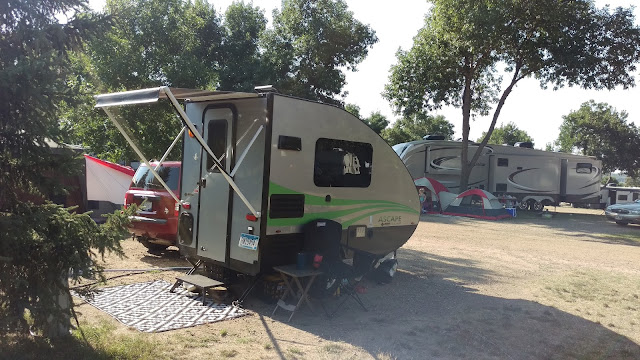 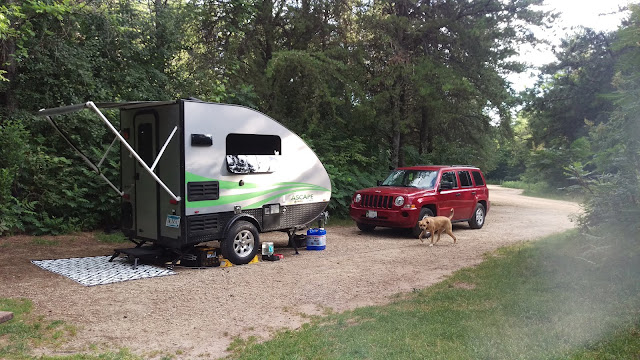